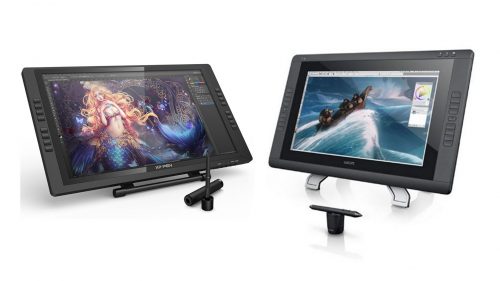 These are my views about this product they are not in any way connected to or affiliated to XP-Pen, you receive an honest point of view from an industry professional.

When comparing the XP-Pen Artist 22E Pro to other brands equivalents I have found this product to be at least up there with them making this a perfect product to review.

TOP DOGS!
My comparison will be between the Wacom Cintiq 22 HD and the XP-Pen Artist22E Pro 22inch.

“Here are the company promotional videos for both displays XP-Pen then Wacom, please note XP video is the XP-PEN 22E not the Pro!”

PRICE
Price is a big factor here with the Cintiq weighing in at around £1333 and the XP at £500 there is a massive difference.

BUILD QUALITY
WACOM: The Wacom are reputed to be top quality as far as build and they are not wrong stylish curves and a fantastic stable stand, with thought to design has always been a strong point of Wacom and of course there packaging always gives that extra wow factor even before you have opened the box!

XP-PEN: I was very impressed with the packaging, on inspection of the monitor it is more plasticity but the plastic has a slightly roughened surface making it seem more rugged and hard wearing the ports at the back DVI, VGA and HDMI are recessed which is good but not as well hidden as the Wacom, the stand work very well and adjustments can be made very quickly indeed.

SCREEN QUALITY
I must say the screen quality of the Wacom is better but not by much a slight bit more vibrant, but after little play with the XP-Pen there is not much in it.

The screen itself on the XP-Pen was a big concern it was very shiny (Slippy) However after a few hours of use it has a nice key. The Wacom and there matt finish I do prefer, I suppose you could replace the film on the XP-Pen to a matt one, this is something that should be looked into by XP-Pen, but its not of major concern.

Both Screens show at a resolution of 1920×1080 and both have tilt action, both work well with a mirriad of different applications.

The Wacom has another feature that you can actually rotate the screen which can be very handy!

Both models have sixteen short cut keys that are programmable (Wacom has two more and direct access to the tablet software and help via three top buttons), and the Wacom has a Zoom Strip on the rear!

I am a big fan of Wacoms Drivers and software but to be honest there is not a lot of difference between Wacoms and XP-Pens if any.

PENS
Both pens have a rocker button the Wacom seems more well built and weighted but the XP-Pen is also comfortable if not a little light (XP-Pen come with a charger that connect via USB one charge lasts a long time!)

CONNECTIONS
XP-Pen: 1 x DVI 1 x VGA 1 x HDMI and USB Port (so USB for the software support and one of the others for the display connector)
Wacom: USB

CONCLUSION
Both are great but for the price the XP-Pen comes in first however if you want the styling and coolness of the leaders in the field Wacom are it, my word to Wacom get competitive with your prices as companies like XP-Pen and Huion are close on your heels!!!!

In my opinion Wacom have been riding on there success for too long quality is slipping as well as support, there prices for fixing issues is a real rip off, if they do not address the issues soon I see there sales falling to the leading competitors XP-Pen.

COMMON QUESTIONS
To finish off this review I wanted answer a few common questions I have seen people asking:

Subscribe to my YouTube channel and really benefit from free offers the latest FREE videos and course promotions by mojomojo.

Share on FacebookShare on TwitterShare on Linked InShare by Email

Share on FacebookShare on TwitterShare on Linked InShare by Email